The magic of Islay

Saturday saw me on Islay for the second time. Two years ago I visited in September and went to the Oa reserve. This time the plan was to go to Lough Gruinart to see the geese flock. The sight and sound of 30000+ barnacle geese is truly one of nature's great wildlife spectacles. The preferred means of travel is a boat from Ballycastle which takes about two hours. We landed at Port Ellen, a small functional harbour with a few houses and shops. 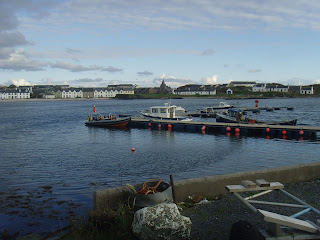 Then a bus up to Loch Gruinart RSPB reserve which takes about 25 minutes. There are barnacle geese on the shore, in the air and in the fields, a truly awe inspiring sight. Unfortunately my photographs do not do the spectacle justice, but it is difficult to capture the sight never mind the sounds. Islay is big sky country and compact cameras do not do it justice. As well as the barnacles I also saw greenland whitefronts, brent, greylag, wigeon, teal, pintail, mallard, lapwing, buzzard and two genuine wild canada geese which seem to have attached themselves to the barnacle flock and arrived on Islay by mistake. Islay has a good range of raptors including both eagles but I only saw buzzard on this trip. Some of the group got twite but I managed to miss them.


There were about 20 whitefronts but very small and far away. This is called a record shot ie a very poor and out of focus shot which proves that you actually saw the bird. I have been known to take record shots of mallard in Ward Park!!

Clearly these are different geese to the first photograph as they are in a different field. Shortly afterwards they all lifted and flew off just as I set the camera down to have a look at the batteries. Other folk got better shots than mine and I hope to be able to include some of their efforts in a later post.