Hard to believe we are nearly at the end of June but I have noticed a decline in bird song as the parents are feeding young and too busy to entertain us. I have had some good sessions at WOW and a boat trip to the Gobbins from Bangor. Not much walking along the coastal path due to a sciatic related muscle problem in the hip area. Hopefully it is on the mend and I will be able to get out and about a bit more. It is getting to be a bit frustrating not being able to walk 3 or 4 miles without thinking about it. I still managed to add Manx shearwater and house martin. Here are a few shots from WOW. Star bird was a male garganey closely followed by arctic terns. There are still non-breeding black-tailed godwits around while shovelers are going into eclipse plumage. My fellow volunteer John Fraser got a good shot of the garganey, thanks to him for permission to use it.

The Gobbins trip gave good views of the seabird colonies and peregrines, plus lesser black-backed gulls which appeared to like egg and onion sandwiches as they followed the boat back to Bangor

We had a couple of nights on Rathlin which gave another nine firsts for the year. As well as hearing corncrake on all of the three days we also visited the seabird centre and walked round the new Craigmacagan trail, which is quite handy to Church Bay and is a superb walk of 2km. It has a lot of habitats in a small area - farmland, grassland, gorse, peat, coast and lake. Highly recommended if you have an hour or two before the ferry or fancy a loop walk to or from Rue Point. Here are a few shots from Craigmacagan.

The birds seen included sedge warbler, whitethroat, meadow pipit, skylark (singing), linnet, common gull, oystercatcher and stonechat plus corncrake along the road on the way back. You pass quite close to a common gull colony with nesting birds, please do not go near it i.e. stay on the path and do not wander onto the beach. You are bird people you know better than Joe Public!!
The seabird centre added all the expected seabirds, plus great skua and a golden hare which gave distant views from the car park.

Suddenly realised its been a while since I put anything up, so here is a round up of the last few weeks. Unfortunately like the queen I am having mobility issues and have not been walking well or far. That means I am loath to carry the scope so photographs are confined to WOW or nice views.

The coastal path has added a few expected birds, indeed on one day I managed swallow, reed bunting and wheatear. With an offshore gannet and a couple of swifts over the house the list is up to 57.

WOW has also added gannet and swift as well as swallow, but no passerines as I was struggling to walk and Kinnegar is too rough underfoot. Unless next week!! These shots are a selection from the last three weeks at WOW all taken from the observation room.

I have also managed a few outings to Antrim and Whitehead which added cuckoo, dipper and house martin to the 2022 list.

There was also a couple of days on Rathlin which gave another nine firsts for the year, but I will put up a separate post for that one - I don't want to overload you!!

Just returned form a child-minding trip to England, where we contracted Covid after two years of avoiding the beast. This clearly limited birding as we had to self isolate in Bolton and also on our return home. We managed a couple of strolls around Elton  Reservoir  before we locked down, but were unable to do planned visits to Pennington Flash and Leighton Moss for mouth-watering goodies. The Bolton garden was well watched as it was pleasant enough to sit outside and watch the resident birds go about their business. I saw blue tit, great tit, long-tailed tit, chaffinch, goldfinch, greenfinch, bullfinch, dunnock, wren, robin, blackbird, song thrush, blackcap, woodpigeon, house sparrow, collared dove, carrion crow, jackdaw, magpie, jay, black headed gull, lesser black backed gull, herring gull and great spotted woodpecker. There was some lovely bird song as well, a couple of timed I dozed off in the garden to the song of multiple blackbirds.

The two walks at Elton early on gave swallow, little ringed plover common sandpiper and willow warbler for the list as well as blackcaps and chiffchaffs singing. On a cold blustery Friday a circuit produced no singing warblers, Six days later they were everywhere. I could have justified a solo early morning walk last weekend but unfortunately I was just too tired and washed out to make an early start. What I did get during a restless night was a calling tawny owl close to the house.

I'm going to use the absence of photos to try and add in a couple of videos from the trail cam as we now have hedgehogs back and  badger and fox passing through. If the videos do not load I will repost the links.

On a more positive note I was back at WOW for the first time in three weeks and we had a good number of birds including a few year firsts and patch firsts listed below. At least there are a few bird pictures.

Things are moving at last on the coastal path as sandwich terns and lesser black-backed gulls return. I also saw the local grey wagtail, while the coastal path added a curlew and a  meadow pipit. There have been changes at the bottom of the garden, not fairies, but tree surgeons who removed four large conifers  in the garden behind ours. and suddenly there is light and space. Small birds seem unfazed, we will see how the magpies pigeons and doves react later in the year. Before and after shots follow. 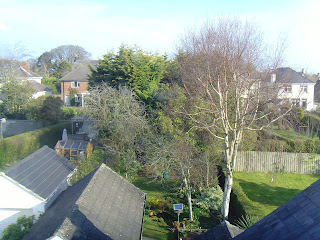 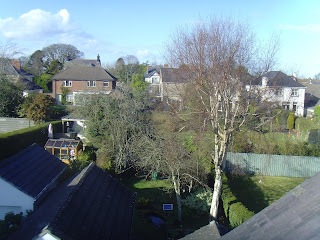 WOW has been good without producing any exciting new birds. There is a mix of winter waders and ducks still present with nesting gulls and passage waders. We have had fun with ringed black-tailed godwits. 24 were ringed last year in April and we have seen 9 of them in the last two or three weeks. We assumed they stayed local but were amazed to find some of them have been reported in Norfolk, Lincolnshire, Lancashire and North Wales. The ones below spent their time on this side of the Irish Sea - we think!! 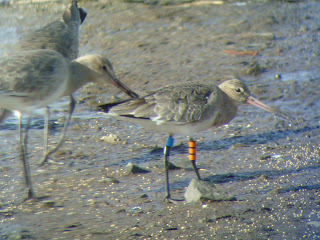 This is BN-O(=)
LB-O(=) Seems to have spent the winter in and around Belfast Lough, having been seen twice. BN-O(=) has also been seen around the Lough with three re-sightings.. With the godwits coming right up to the window it is fairly easy to read the rings, not as easy to get a clear picture in a feeding frenzy of 150+ godwits. The long staying ruff also comes over to feed and is colouring up nicely. There are 5 Mediterranean gulls, two pairs and a single.

I'm adding in some of John Mason's pictures, first because his camera is far better than mine and secondly because I did see some of these birds but couldn't get good shots. He is able to get nice flight shots which is beyond my digi-scoping set up. Maybe I need a good camera? 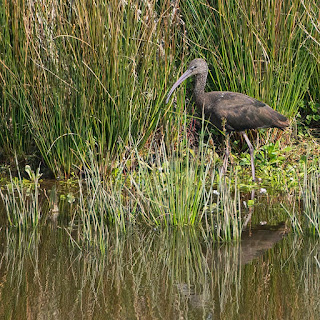 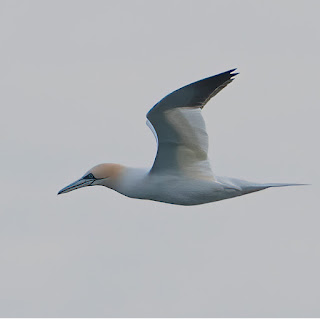 I did see the great white egret and the glosssy ibis. I also saw a treecreeper, but not that one! Gannets have eluded me so far but they are moving north to Ailsa Craig and it won't be long until we see them in Belfast Lough.