Just a short update on our jaunt to London which was not all I hoped it would be as I dragged Tanya round some of my favourite haunts. We first visited Kensington Gardens and failed to see the little owls or attract any birds down to feed on the plentiful supply of pine nuts we had with us. We did however take a boat trip along the Regent's Canal to Camden Market where we were treated to very close views of starlings looking for easy pickings. Apart from that it has a wide variety of stalls and food outlets plus the bonus of watching barges use the locks, a very relaxed way of therapy. 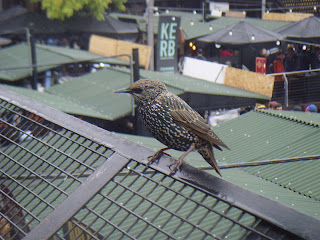 Rainham Marshes has just suffered its driest summer on record. Where there were once vast pools teeming with waders, ducks and gulls there was only hard brown mud. In fact my total for the visit was the worst ever and there was little to see. There are normally three large water areas and two were bone dry. The third had some water so most of the birds concentrated there - the only one with no hide overlooking it. We did see a flyby kingfisher, a little egret, stonechat, buzzard, kestrel and finally after nine visits and multiple disappointments I finally set eyes on a pair of bearded tits. Much bigger than I imagined, and thanks to the couple ahead of me who stopped and looked. I did the same and there they were in the tops of the reeds. No photos I am afraid, I just enjoyed the birds. Tanya dipped out as she did not fancy a second walk.


Last stop the Wetland Centre at Barnes which did have water. Highlights were good views of cetti's warbler and young, peregrine on the hospital, chiffchaff and a few late swallows. I was using the travel scope and was getting a bit of vignetting as I had not used it for a while, sorry about that, I think I have sorted it now. 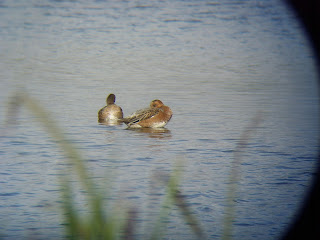 I don't normally photograph captive birds but as it was my last visit hear are a couple of photogenic specimens.


Back home to Belfast WOW on Thursday and a quiet day until a female sparrowhawk went looking for a meal and put everything up in the air. No photos,  as my charging cable finally gave up the ghost and I have no way of recharging the batteries. I am working on it via Amazon, but might invest in an attachment which will clamp my i pod to the scope. Highlights were returning shelduck, 280+ teal, 3 curlew sandpiper, over 700 black-tailed godwit, 20+ bar-tailed godwit, 100+ knot and 2 meadow pipit. Sandwich and common terns were noted at Kinnegar by one of our four visitors. Water levels are dropping and are good for waders hence the large numbers.