A rising tide at WOW brought 20 golden plover, 4 snipe and 2 ravens. Lack of feeders limited the passerines but we still logged 28 species. There were times when the birding proved a little difficult especially when all six Koniks were in front of the observation room, but eventually they moved off to the other side of the reserve. PS the windows needed cleaning. 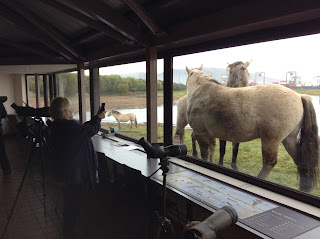 The bad news is that we lost our last cygnet this week. We started with four and the first two were sent off for an autopsy as there was a worry of some dread avian killer bug. The autopsies revealed multiple fractures and organ damage consistent with being hit by a bus? We do not have any buses on the reserve and the cygnets did not go out on the road, get clobbered by a bus and then come back in and die. The only conclusion we can come to is that they were run over by the ponies in one of their stampedes when they gallop round for no apparent reason. If the cygnets were in the way and unable or unwilling to fly.......CRUNCH! Two further questions are:
This did not happen last year when two cygnets fledged and flew successfully.
Why did this year's birds stay on the reserve and not fly off once they were able to fly?
We assume the last two cygnets went the same way, so we now have "killer ponies" on the reserve!!