Home from the holidays

So much to add and so many photos I am going to do this in two parts starting with Lancashire, Pennington Flash and the drive north to Tyneside via Upper Teesdale and Weardale. Pennington Flash produced a few year firsts and a list of common species. The notable birds were great spotted woodpecker, willow tit, stock dove, sparrowhawk and scaup. The Bunting hide was well stocked and well populated with tits and finches - a joy just to sit there and watch birds coming and going. At one stage there were 15 stock doves feeding. Later on  I overheard a remark from another visitor in another hide that the Bunting hide wasn't worth a visit as it was "full of pigeons". Here is a shot of some of those pigeons which I appreciated even if others didn't.


The drive north was via Langdon Beck in the hope of seeing black grouse a bird which has eluded me. Our luck was in as there were between 15 and 20 males and one female in a field where the birds lek. Photos are poor due to trying to digiscope from the car in poor light and fading batteries. Birders are asked to watch from the car as any attempt to get out for a better view just scares them away. 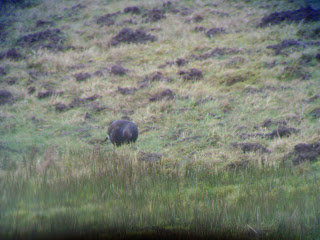 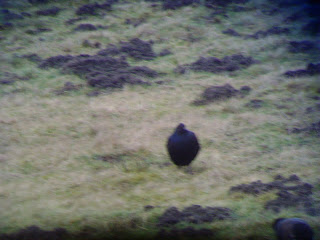 We also saw several red grouse en route across the moors, truly a gallinaceous day when you throw in the occasional pheasant. All in all then a nice set of birds which are difficult to get in County Down. Didn't realise that canada goose was a 2017 tick as I used to see them in London all the time!