Belfast WOW on Thursday was different. First we had the ponies right up at the window on a calm warm sunny day.


Then we had two med gulls on the tern island and redpoll at the feeders.


With the tide low at 1150 and the one month window to work on the tern islands from March 17th to April 17th just open Chris and Monica donned their waders and set off to work. The result was an exodus of birds but hopefully the refurbished tern islands will attract even more breeding terns later in the year. 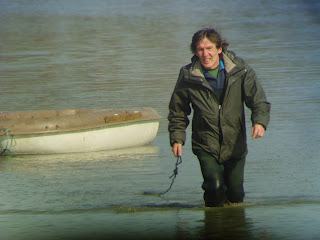 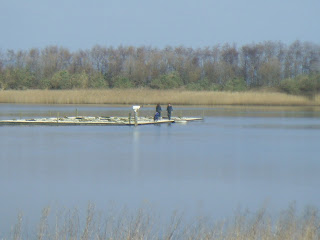 I think the idea is to do the work as the winter visitors leave and before the summer ones arrive. You also need a decent day and low tide when the birds are feeding on the Lough. Next week tides are high so work might not happen. Despite this we saw 32 species with one addition to the WOW patch list in the form of a greylag goose.

Today I walked the patch and managed to up the list by three grey heron, rock pipit and after 15 months of checking every black-headed gull in Bangor PATCH GOLD  in the form of a Mediterranean gull at the Marina. First spotted flying round and landing for short periods, then having a wash in the pool where the pedalo swans are!! Quick record shot and it flew off for another circuit of the Marina. 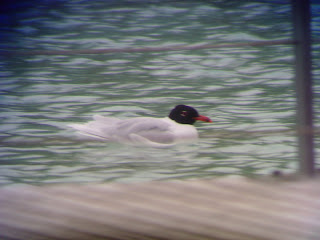 On the way back when things were quieter there it was again sitting on the flag pole at the gangway down to Bangor Boats. 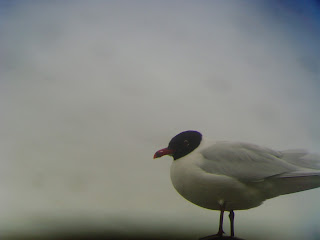 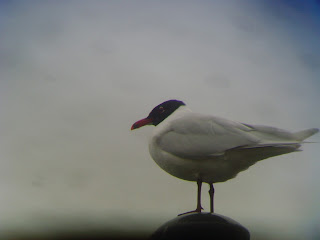 Really chuffed to finally nail this one on the patch. The heron was a bonus as it is also a hard one to pin down, last year it was raiding my garden for frogs but there has been no sign of one this year and the frog spawn has been there for 2 - 3 weeks. I also saw a purple sandpiper at the Long Hole whilst looking for the rock pipit. 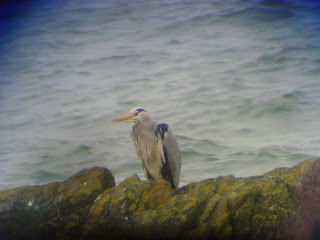