And I dont mean Donald Trump and Joe Biden, I am talking about a bufflehead and an American wigeon. Just when you think that the year is meandering to a close and there will not be too many birds to add to lists these two turn up. The bufflehead was a first for Northern Ireland and a fourth for all Ireland and it was spotted on the River Quoile about two weeks ago. Initially it was out in the open but recently it has moved upstream and has to be viewed through a screen of sallow, willow ivy etc.. This makes it hard to get any decent photographs and the nearby Castle Island hide which would give excellent views has beeen locked since March. This link will show you a nice picture the finder took on the day it was discovered out in the open section. http://nibirds.blogspot.com/2020/12/bird-news-saturday-5th-december.html

The great and good of Northern Ireland birdwatching were there on Sunday in our own version of a socially distanced mass twitch. 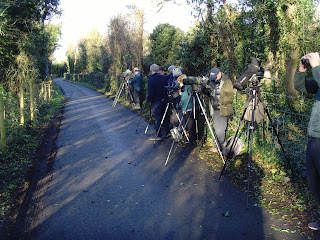 Apparently the bird is still around and will hopefully stay for the winter like the Barrow's goldeneye of legend. It has drifted back to where you can get good views and also drifted upstream where you can get clear views from a long way away!! Nevertheless it is on my life list.

The American wigeon popped up at the river mouth at Glynn with a small flock of wigeon and is indeed showing well. Glynn station has a nice platform, good access and a shelter to sit while you wait for a train. I have been there several times and there is usually something good to look at plus dipper in the Glynn river. This week there were the usual ducks and waders plus the American wigeon and a female goosander. This is not a common bird in Northern Ireland but we do get a few every winter. 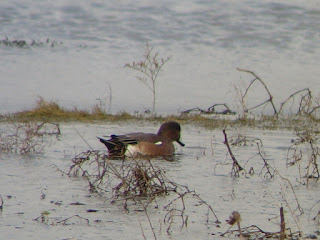 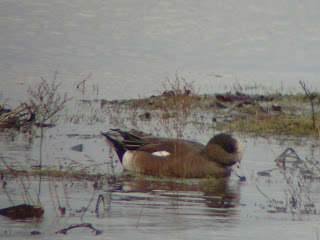 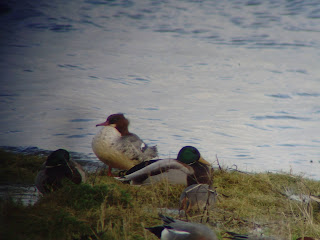 Apart from these exotic visitors things have been fairly slow. WOW opened for two weeks but will be locked down from Christmas Eve until mid February. Hopefully at least one of the hides will stay open. On my volunteering day I had a bright sunny morning and distant birds apart from mallard and teal. I did my usual list and noted that my two previous visits were on March 19th and October 15th. That is three Thursdays in nine months with a six week lockdown into the new year. I'll keep you posted as to how things pan out next week. I had 26 species including the buzzard. The warden cut down the "buzzard tree" as it was a predator perch according to the RSPB! It now sits on the tallest bush just outside the fence secure in the knowledge that the warden cannot cut it down - clever buzzard.


No additions to the WOW patch recently but I managed to add redpoll and mute swan to the Bangor West total. The redpoll arrived on the feeder - first in the garden since 2016. The mute swans flew over while we were out for a walk along the coastal path, only the second time I have ever seen them on the patch. Garden birding is interesting as I am trying to do the Birdwatch Ireland garden bird survey. This involves counting the maximum number of species in the garden in a week and then doing this for 13 weeks. First week I had a maximum of 13 goldfinches, next week 7, this week 6. Hardest bit was trying to count coal tits which are everywhere and never sit still. I'll keep you posted in 2021 as with lockdown I may spend more time looking at the garden. I can even compare my spring garden lockdown list with my winter one - how OCD is that? 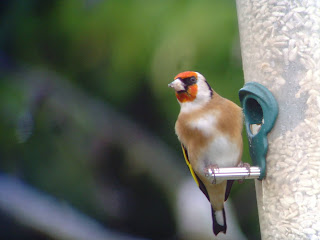 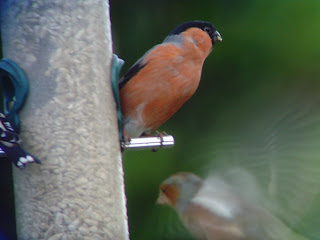 I have discovered that magpies will eat out of date mince pies, so don't throw them in the bin, leave them on the lawn. Have a safe Christmas and make the best of whatever way it falls. I'll hopefully have a wrap of 2020 at some stage as there isn't much else to do. Before you ask, yes, I am planning to get out birding on New Years Day, for the good of my mental health. Just me in a car with binoculars testing my eyesight!!