Brief update as we move into February with increasing daylight and rising temperatures. Redwings featured well this year so far. They have been in and around the garden, one actually sat in my hawthorn tree recently but two appeared at WOW this week - perched above the buzzard in the buzzard tree. Checking back revealed that they were the first redwings I have ever seen at WOW in over 20 years of visiting the site. We also had song thrush and mistle thrush on the same day but so far I have not yet recorded blackbird in 2020 - isn't birding wonderful!! I also added a sparrowhawk to the WOW list as it flew over harassed by a hooded crow. The species list hit 37 for the morning which is a good number for  three hours on the site. With a bit of diligence and a walk to Hide 2 I would have hit 40 fairly easily. The following photographs were taken recently around the observation room and the feeders.

The following photo explains why my seed feeder was being emptied on a daily basis. The rook was sitting on a nearby branch happily munching sunflower seeds. A bit of pruning with the saw removed his perch so hopefully he will have a bit of a challenge in future. Now all I have to do is remove the cat which hides in the shrubbery looking for a meal. I think a mega super-soaker is called for!! 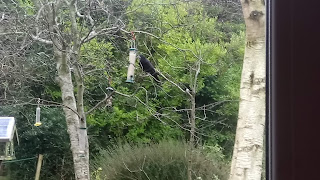