Cracking day out despite gales and wintry showers. We started at Linton Lane with a hunting  barn owl, finished at Hauxley with a water rail and in between had three separate marsh harriers and a total of 75 species for the day. Before I go through the highlights a brief mention of black grouse in the Pennines and four red grouse which walked across the road in front of the car. Bolton gave up a nuthatch at the children's playground but the tawny owls refused to call in wind and driving rain. Martin Mere puddle jumping competition added pochard and ruff with a kestrel somewhere along the M62.

The forecast for Saturday's birdathon was very windy - force 6/7 and blustery showers, and they got it right. We spent a couple of spells sitting tight as showers moved through, but never more than 15 minutes. We had good views of barn owl  and little owl making it a two owl day. This is rare event in Northern Ireland as we only have three species and one is a rare winter visitor. We also saw pink-footed goose, three marsh harriers, grey plover, water rail, goosander, common scoter, sanderling, and red-throated diver as well as a host of common species even though most birds were keeping their heads down. We rolled up at Chevington Burn and could see nothing, but in ten minutes we had added six species. Stonechat popped up at Druridge Bay as did a mixed twite, linnet, chaffinch flock. Displaying skylark was a nice sight considering the wind speed. High tide meant we missed a few coastal birds but all in all we were happy bunnies at the end of a long day. It was also good to meet up with Dave who writes a blog about the Druridge Bay area and keeps me on top of what is happening there. Always nice to put a face to a name and we had a good chat.


Every photo so far has been taken by David as his camera is a lot better than mine. Here are a few of mine and you can clearly see why I do not put a lot more of mine on.

It's not PC to dwell on might have beens but we missed out on pied wagtail and fulmar, failed to see pintail and smew and couldn't find any pochard. Just goes to show that 80 in a day is do-able. We'll blame the gale force winds and enjoy the 75 we did get. Here are a few scenes to show why we keep coming back.

The journey across to Cairnryan included a stop at the red kite feeding station near Castle Douglas and a hen harrier en route. All in all a nice little break topped off by a meadow pipit at WOW this week 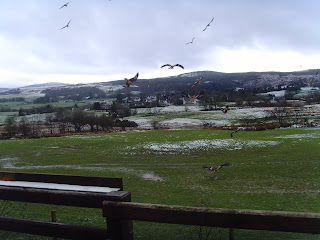 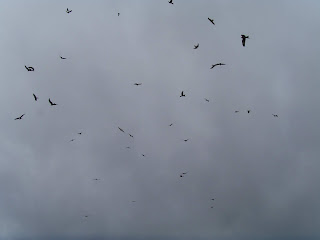