Been away for a while due to the sudden and unexpected death of my younger brother Bill. Four days after my last post he developed an aortic aneurism and despite the efforts of the intensive cardiac unit at the Royal Victoria Hospital he could not be saved. Obviously birding took a back seat, but the family are slowly getting there and remembering a nature lover, birder, walker, and photographer. His photos appeared regularly on BBC weatherwatchers and his Flickr site contains almost 12000 images, many of them bird related. Here he is earlier in the month in Carrick helping me lead a walking group on an unfamiliar route. He is on the left hand end of the group. 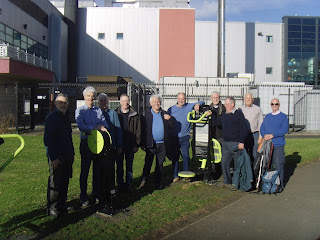 This is the last photo of him at the CS Lewis Square in East Belfast looking at the stone table sculpture. 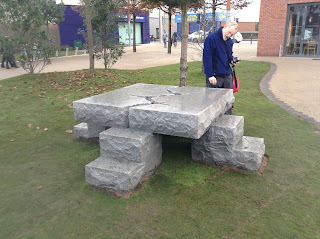 We are left with pictures and memories which will help to ease the hurt, as will nature and the great outdoors, plus, " A wee Maudes and I could force down a latte!""

I got back to birding at WOW on Thursday and we had over 30 species including a good array of waders and ducks. We also had a grey heron fishing close in and an American visitor a bit further away. 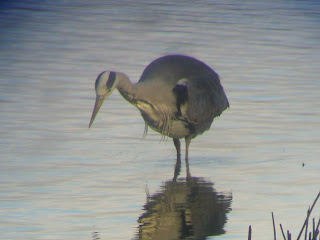 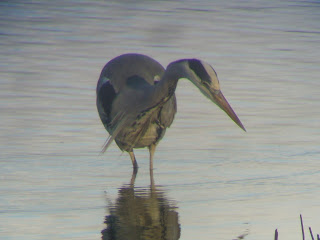 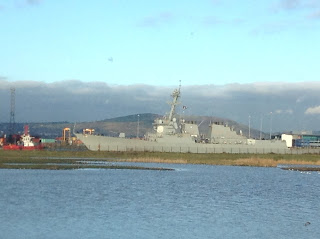 There are no additions to any of the lists, partly because I had not been out and partly because anything else is a bonus. Off to Bolton for Christmas and hopefully some incidental birding or duck feeding with the grandchildren, otherwise have a Happy Christmas and a prosperous bird filled 2017.
Posted by derek at 15:31