Another stint of volunteering on a cloudy but dry morning. We had 25 species on view including buzzard which  made  four separate flyovers all with the same result - everything lifted and panicked. We also had a lesser black backed gull attempting to lift a moorhen chick. It dropped the chick which was then surrounded by excitable black headed gulls trying to hassle it or perhaps seeing an easy meal. In the confusion the chick staggered around and eventually sprinted for the safety of the reeds while the mother attacked the gulls.  If the gull had not dropped it when it did it was dinner, as the mother was too far away to intervene. In a split second the gull was down, grabbed the chick and away.

The feeders were busy with goldfinches and greenfinches both of which had fledged young.  There were also three redpolls around.


Most gull chicks have fledged and the terns are still on eggs. The swan family is down to four cygnets from six, there were six shelduck young and at least three broods of mallards.Worryingly for all concerned the water levels are dropping and we need substantial rainfall soon. Sorry for all you holiday makers!! 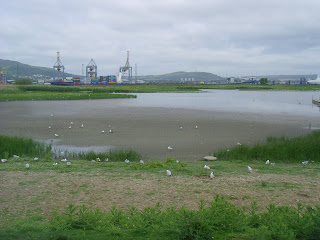 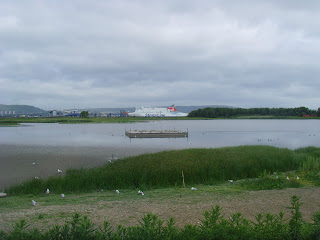 Much more of this dry weather and we will be able to walk out to the tern island. and the terns will be posing on posts on dry ground.