Suddenly realised it's over a month since a blog, then suddenly realised there aren't a lot of pictures to post. I have been out; but not with the digiscoping kit. With WOW closed these's no incentive to lug the stuff round on the off chance of a nice shot. Even took the kit to England and didn't use it as no hides are open there either. So you'll get a spring update, the odd scenic view and a couple of garden birds.

The local patch added sandwich tern, meadow pipit, reed bunting and lesser black-backed gull. I had thought I might add a few more but the wind is north /north-east and cold so there's not much moving here. Everybody else is getting wheatear and whimbrel but North Down is not.

WOW added a Mediterranean gull and finally a cormorant, but I haven't been there for three weeks. It is due to re-open on May 24th. I had hoped the hides might open this week as outdoor spaces, but some idiot pen-pusher has decided they are indoor spaces. He clearly has not sat in one for an hour on a cold January morning!!

The 2021 list slowly crawled up with long-eared owl and whooper swan nearby, plus chiffchaff, pochard and swallow at Oxford Island. We winged a trip to Bolton for essential child care and did a few local walks in and around Bolton. This added a few gimmes like canada goose, sand martin, willow warbler, nuthatch, dipper and tawny owl. It also added a couple of unexpected bonuses - little ringed plover and cettis warbler at Elton reservoir. I could not find a woodpecker but hopefuly we will be back in England in June and I will once again try and find one. I have been looking locally but clearly in the wrong places.

Back in Ulster we walked round the Ulster wildlife reserve at Slievenacloy and added skylark with close up views of singing birds. We also had willow warblers, stonechats, meadow pipits and a solitary golden plover in breeding plumage. Haven't been there before but will certainly be back.

The garden has settled down, one blackbird, dunnock, the odd chaffinch, occasional bullfinches and the blackcaps have finally gone. There are still coal, blue and great tits around but in much smaller numbers, even the goldfinches have disappeared. The seed lasts a week and the kibbled peanuts which were being re-filled daily are hardly getting touched at all. I'll finish off with a nice view of the Sixmilewater at Antrim which produced two out of four classic river birds, grey wagtail and grey heron plus willow warbler, chiffchaff, sand matin and swallow. 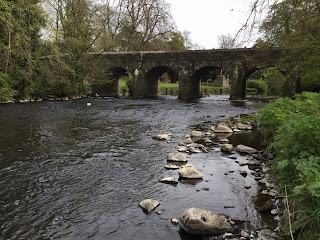 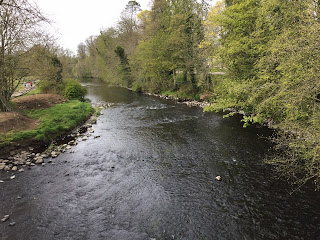