No point in beating about the bush here, like a demented whitethroat. The good news was the rose-coloured starling which turned up in a housing estate in Dundrum. The bad news is that the arctic tern nest in front of the observation room at WOW has failed. The terns were off the nest and looking puzzled, then they were not sitting/changing and a quick check revealed no eggs or no chicks. They are still hanging round the area and we hope they will lay a second clutch. We have no idea what happened. There are four hours of daylight before anyone comes in and five hours after we lock up so they could have been predated by a magpie, crow or gull. Definitely not a fox. Despite the pall of gloom over the volunteers WOW still has lots to see and last week turned up dunlin, greenshank, common sandpiper and a roseate tern which I have yet to connect with. Kinnegar shore had two sandwich terns as well as all the usual birds. I spent some time two weeks ago at the feeders as the lagoon was only giving good views of black-headed gulls.

Out on the lagoon this week we had some nice birds, including the obligatory tern on the plank shot.


The rose-coloured starling hit the headlines midweek so we went off on Friday to see if we could find it. Fortunately it was one of those occasions where it was not a hard job. Find the street, walk down and hope for a man with a large camera pointing over a fence at  a feeder and bingo there it was, very little effort involved and the chance to take a few pictures. We had a chat with the finder and that was that, duly ticked and recorded. A celebratory lunch in Newcastle was followed by a walk from Dundrum along the old railway line to Ardilea and Dundrum Inner Bay north. This produced lapwing, curlew, shelduck, grey heron, cormorant, mallard, three species of gull and 11 little egrets roosting right in the north of the bay near the inflow. The Shimna River had a pair of grey wagtails but I was unable to find any mandarin ducks at the boating pond.

The coastal path finally produced a few goodies in the late evening on a calm millpond sea. I took the scope down to a vantage point and was able to see quite far out. Gannet, manx shearwater and razorbill were supplemented by guillemot, black guillemot, eider duck, oystercatcher, cormorant, sandwich tern leser black- backed, black-headed and herring gull. Singing blackbirds and wood pigeons plus hunting house martins made for a very pleasant thirty minutes.

Finally the pictures you have all been waiting for, the star of the show all the way from Asia via eastern Europe..........roll of drums..............rose-coloured starling!! 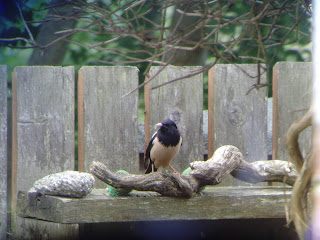 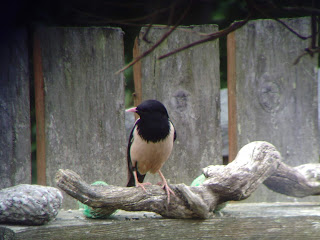 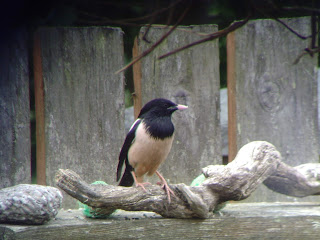 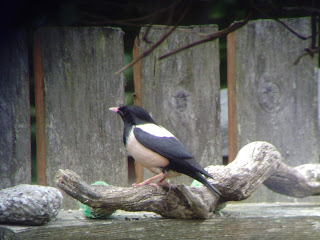