The title is a cryptic crossword clue which hopefully you will get by the end of this post. If not the answer will be on the subsequent post. Please feel free to post the answer in the comments section plus any other observations you may have.

First a quick trip to Castle Espie on November 6th on a rising tide in the hope of  nice pictures. Unfortunately heavy rain put paid to that and by the time it cleared the tide was well in and the birds had moved on. We did seee grey plover, little egret, greenshank, kingfisher, golden plover and 46 whoopers at Islandhill as well as all the regulars. Bonus was a flock of twite from the Limestone Observatory which we decided were redpoll rather than linnet. We never considered twite as they are relatively rare here, but closer examination of the photographs and a bit of help from NI birds gave us an unexpected bonus tick.

The Greater Belfast area had serious rain on three days in the last week and at last water levels rose significantly at WOW. From nowhere we suddenly had water and birds - there were over 500 teal, 60 wigeon, 200 curlew, 60 knot, 20 dunlin, 200 lapwing, 150 black-tailed godwit, a snipe  and a shelduck!! This plus the usuals gave us over 30 species for the first time in about 5 months. Added to the excitement of counting we had three birds with rings. The first was a greylag goose with a white 212 on the right leg. We suspect this was one of the geese ringed and collared as part of the study to see where the geese go and how they impact on the Harbour Airport. The other two ringed birds were black-tailed godwit and these were much more exciting.

This bird has been seen regularly here since it was first ringed in Iceland in July 2007. We saw it in May of this year and it was seen in Whitehouse Lagoon in August this year, now it is back at WOW at the age of 11. In many ways it was like welcoming back an old friend. I'll post a full history next time. 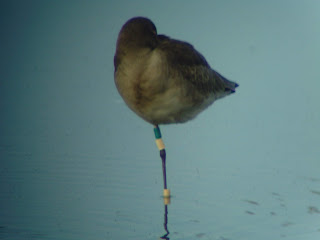 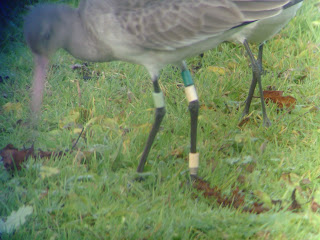 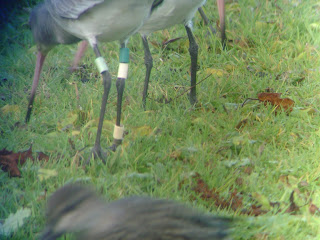 The second bird was new to the reserve  so we forwarded the description to the relevant authorities and this is what came up!!

Having been ringed in The Wash in 2002 it was not seen for 13 years, suddenly it popped up in Galway and has been regularly sighted since and is now 16 years old. How cool is that for a godwit. This sort of staggering feedback shows us how important ringing programmes are in building up a picture of bird migration and we were well chuffed - to coin a phrase.

As well as bringing in birds to the reserve the rising water levels pushed the birds towards the observation room and gave better photo opportunities than we have had recently.

Three photos to finish with showing that WOW is back in business and perhaps you can now solve the clue.