Having asked for lots of rain and lower temperatures for WOW we have been stymied on both. Water levels rose briefly for a couple of weeks and we had a few waders coming in to feed, but there has been no significant rain for ten days and the reserve has dried up again and is as dry as it was at the end of July. Kinnegar is still good as it is a river estuary, albeit a small one and tidal. It is also a reasonable roosting site and has provided quite a few roseate terns. There are no terns on the reserve at all now as the planks and the islands ae are high and dry. I dropped in one weekend hoping for sanderling and picked up a golden plover. The large numbers of roosting curlew (400+) were joined briefly by a whimbrel. Last Thursday as the tide dropped and the curlew flew out we were looking at 2 curlew and 34 moorhen and that was it. A snipe flew in and dropped into the reeds and disappeared before most of us could get onto it.  The buzzard decided to land on the mud before flying off and there were finches on the feeders, but the main reserve was largely empty apart from hooded crow, magpie and woodpigeon flying through. There are always distant gulls over the Lagan and the occasional pipit, wagtail or house martin but we tell visitors to go to Hide 2, walk to the channel and go to Kinnegar if they need excitement.Talking of excitement here is a cruise liner which docked nearby two weeks ago before we lost what little water we had. 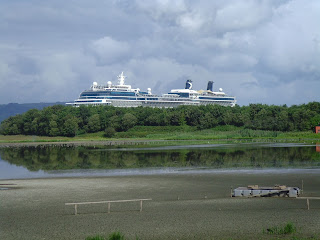 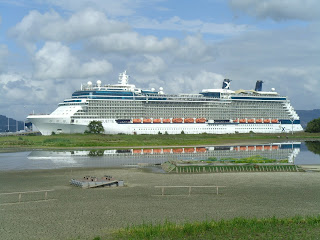 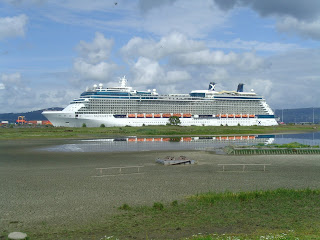 The other highlight was a long awaited boat trip to Inishtrahull - the most northerly point in Ireland with the oldest rock, Lewisian gneiss. I finally made the ninety minute trip with 11 other birders and set foot on the island. It has been in my mind since someone brought a piece of gneiss for the school rock collection some years ago and I looked it up and thought that would be a good place to go. I never ever thought I would get there but thanks to Jim Wells and Charlie Stewart I made it over on August 29th from Portballintrae. One of the party, Anthony McGeehan, brought some chum to try and lure in a few petrels and this worked even though we only drifted around for a short time. If we had given it longer we might have attracted more, but the aim was to land on the island, so we only drifted for 30 or 40 minutes. Once the chum hit the water we had up to a dozen fulmars round the boat very qiuckly. Eventually we got good views of three storm petrels. The bird of the trip was a sooty shearwater seen on the return leg without the aid of any chum at all. There were two with about 40/50 manx shearwaters and they were easy enough to pick out once Anthony spotted them. The group list for the trip was as follows, my sightings are in bold: fulmar, sooty shearwater, manx shearwater, storm petrel, gannet, cormorant, shag, grey heron, eider, sparrowhawk, oystercatcher, whimbrel, curlew, great skua, lesser black-backed gull, kitiwake, guillemot, puffin, rock pipit, wren, wheatear, skylark, chough, hooded crow, raven, starling. I also saw sanderling and ringed plover on the beach at Portballintrae. All in all a magic day despite the buffeting on the way there and back. At least the boat is covered so we stayed dry. The downside of this was getting onto a bird and having a large wave hit the perspex and losing the bird!! Fortunately the sooty stayed in view long enough for us all to get a look at it. Here is a selection of pictures which gives you a flavour of the trip. The first four are by Michael Jackson who is clearly a better photographer than I am - which wouldn't be hard. He also has a better camera as well.