May round up at WOW

Once again I waited for a week or three and then discovered I had loads of photos and not a lot of time so here goes on a catch up of the last three weeks at WOW. The garden and NDCP have not been neglected but are not turning up new birds or meaningful photos. The first point is if you want good views and pictures of terns and gulls come to WOW.

The black-headed gulls are feeding young, mostly on the islands but also in front of the observation room.There are chicks of all shapes and sizes from newly hatched to flying.


The other species on the reserve are also coming in close, still looking for millet I supppose. Unfortunately they are out of luck as we are not supposed to go out during the breeding season in case we spook the birds and the gulls and crows make a raid on the eggs/chicks.

Things got really exciting last week as we had swans with cygnets, a shelduck brood and the new tern islands finally went live. They were supposed to go out at the start of May but the terns were late in arriving so it was decided to hang on in case the gulls took them over. There are two small ones in front of the observation room and a larger one over at hide two. In less than 24 hours  there were two gull nests on the smaller ones, although the terns are showing interest.


Latest news is that there are at least six Med gull chicks on the main island. They are easier to see on the camera monitor so here are a couple of screen shots. 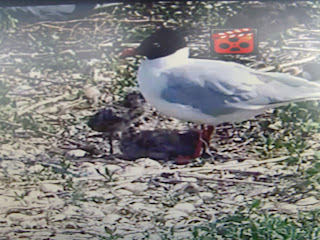 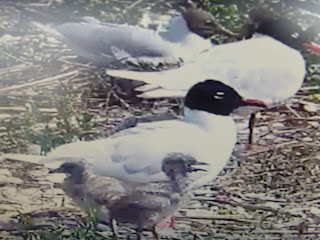 I'm skipping the list update as I need to do another post on the trip to the Gobbins on June 2, when we sailed through mist and fog in pursit of seabirds.