The spring has sprung
The grass is riz
I wonder where dem boidies is?
The little boids is on de wing......... all over the patches!!

At last we have movement, rising temperatures and a flood of migrants. Mind you I haven't managed to connect with them all just yet, but I have managed a few. The coastal path finally turned up a sandwich tern and the WOW patch added quite a few, especially on Saturday when I helped to take some members round the Harbour Meadows site. This area is normally closed to the public but the RSPB are holding a series of guided walks to let members see where their money is going. This was a fascinating insight into what goes on in this area and the changes that have had to be made as the site is next door to Belfast City Airport. The highlight for me was a small marsh where we put up 22 snipe and 2 jack snipe. We also saw reed bunting, buzzard, heron, stonechat, willow warbler, blackcap, chiffchaff and meadow pipit. Water rails were heard as well. I was so busy taking photographs for the RSPB I forget to take some for myself, fortunately Margaret sent me one taken near WOW. I will try to see if Chris can let me use the ones I took for him!


The garden is still pulling in birds as you can see, nothing extravagant except for a female blackcap which I managed not to snap.


WOW is still between winter and summer with wintering ducks being serenaded by willow warblers and blackcaps. Only one tern so far - a sandwich, and only one migrant ruff. The big attraction is the Mediterranean gulls which appear to be in breeding mood again this year.Numbers vary between one and five on the big island. 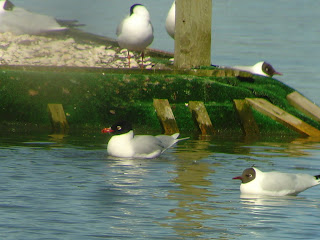 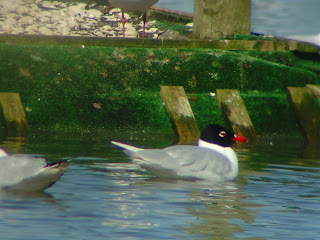 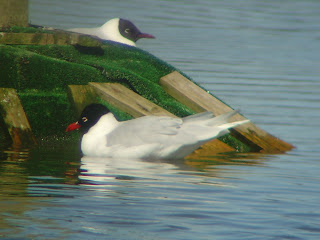 Other attractions are as follows

The herons and hooded crows will not be around much longer as the gulls and terns will chase them once they are on eggs.As you can see they are getting "jiggy-jiggy" and for a short time we are able to tell male from female! They are probably two to three weeks later than they were last year. 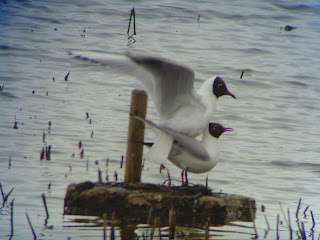 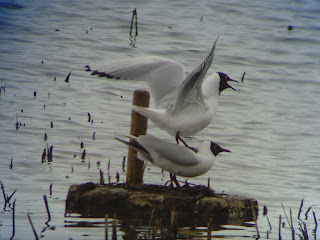 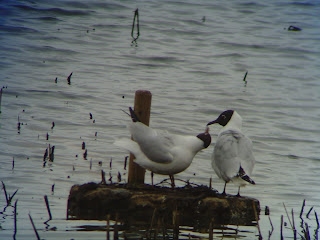 Late news from today (Saturday) was a Patch Gold wheatear on the rocks at Stricklands, the first I remember seeing in 25 years of walking the coastal path. Right place right time, the 4 purple sandpipers near Pickie were also not expected in April, but were starting to show signs of breeding plumage and will not be around much longer. It is always nice to see a winter leaver and a summer arrival in the same area at the same time. My first wheatear last year was in the Bocquer Valley in Majorca.