Not a lot going on at the minute so I tried to spend some time in the garden seeing what was about in the colder weather. I really haven't done this much this winter and this is the first time this year I have set up the digiscope and waited. I failed to get a shot of the local house sparrows but here is a selection of garden visitors. There are as many as eight blackbirds at one time and 5/6 chaffinches. At one stage I had 20 starlings squabbling round the suet feeder which is emptied daily - and refills are not cheap! I have seen two male blackcaps and one female so am unsure how many I actually have. The rook is an occasional visitor if there is no movement around the window, one false move and he is off. The magpies are the same while the wood pigeons and the squirrel are more difficult to shift. 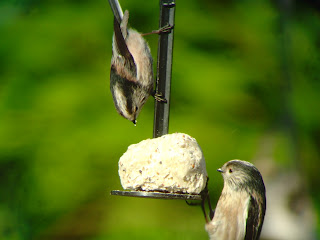 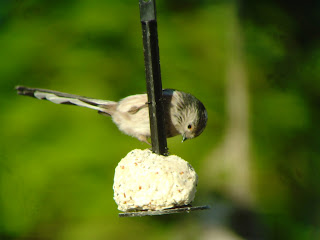 Nothing terribly exciting at WOW but a female scaup was spotted briefly and we had good views of displaying shelduck, there seemed to be nine males chasing one female. The gulls were displaying and investigating the nesting island for the first time this year. The wigeon had all but disappeared but despite a quiet morning I still managed 43 species between WOW and Kinnegar. 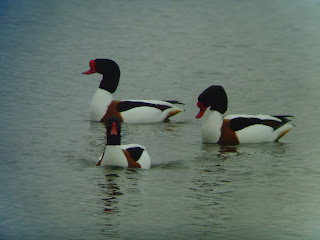 I also managed to see four whooper swans at Islandhill and dippers at Mossley Mill plus a wren along the coastal path, so totals are inching upwards as we wait for the migrants to appear. Presumably the cold snap will set everything back a week or two although sandwich terns and lesser black backs are about. Roll on March!!