After a few weeks of not much happening things slowly moved recently. WOW delivered razorbill and meadow pipit, while Castle Espie came up with a grey plover. WOW has been fairly quiet lately although we have had some peregrine action as two birds sat on the light towers in the wind turbine area and made occasional flyovers. This made counting quite difficult if you were half way through counting the teal!

We also saw the return of an old friend from Iceland who featured in the blog back in February. The bird was ringed in Iceland in July 2007 and is now ten years old. Hard to get a good shot as it was continually moving and in the middle of a flock of feeding godwits. 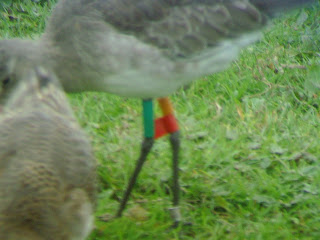 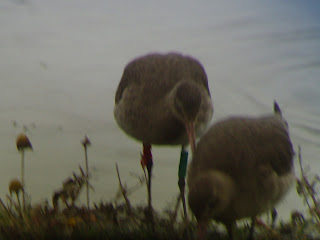 Thursday saw my birding pal David and I heading for the Montgomery"hide" at Castle Espie to hit the rising tide, which we did successfully. You need to be there about 30 minutes before high tide at Belfast which was 10.05. As you can see from the first couple of pictures it was pretty muddy. As the tide pushed up the birds either swim or fly up the estuary past the hide. As they have knocked the roof off the hide to discourage anti-social behaviour the birds give it a wider berth than they used to but you still get good views.


One hour and fifteen minutes later the mudflats were covered and the birds were either floating on the tide or roosting on one of the many high tide roosts. There are three within sight of the hide but you really do need a scope to see them well. Once the tide reaches the banks of the lough it then spends a couple of hours simply filling up and getting deeper. If you arrive at High tide at Comber all you will see is a pretty full lough. You need to be there earlier to get the birds pushing up towards you. We had a rich full list and a splendid ninety minutes looking at brent geese, shelduck, wigeon, teal, whoopers, mute, curlew, redshank, lapwing, dunlin, grey plover, turnstone, eider, black-tailed godwit, little egret, grey heron,  black headed gull, herring gull, and great black-backed gull. The soundscape is as good as the viewing with bugling whoopers, guttural brent, peewitting lapwing, whistling wigeon,  spooked redshank, and the signature sound of Strangford Lough in winter, the call of the curlew. We even had a squawk from a little egret. If I could tape it and sell it I would make a fortune from people wanting a tape of nature to de-stress and put them to sleep. Sorry, nearly dozed off there!!