WOW on the day before we left still delivered close-ups of ruff. 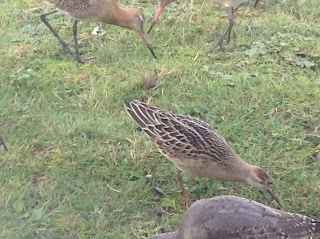 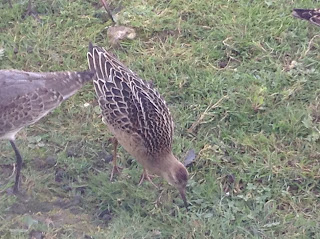 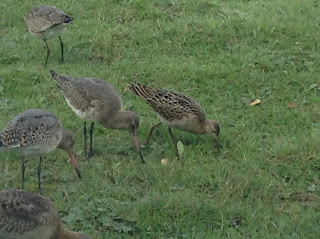 But enough of WOW and on to Oslo. It is 42 years since we visited Norway. We were there for a holiday in July 1975 and at that stage I was very much a novice birder. I have no list of what I saw as I didn’t keep lists back then. What I did was record any new birds in my guide book with the date and the place. About a year later I found new birds were harder to come by so I started to list any birds I saw in a notebook and added new birds to the book. Over the years the new birds got fewer and the notebooks took over.  By going through the book I have found out that in two weeks in Norway I was able to add 17 new birds to the list at Flam, Balestrand, Kjossfoss, Finse, Vatnahalsen, Heirina and Esefjord. We had a fjord and mountain holiday at Balestrand and Vatnahalsen.

Some of these were birds which I now regularly see at home but saw for the first time in Norway  – sparrowhawk, golden plover, raven, dipper, wheatear, long-tailed tit, tree sparrow and reed bunting. Others were birds which are easy to see on the mainland but not in Ireland – nuthatch, willow tit, and redstart. The third group were continental specialities such as nutcracker, white wagtail, garden warbler, bluethroat, twite and Lapland bunting. I must admit to a pang of conscience about the garden warbler. 42 years down the line I fear it was either a chiffchaff or a willow warbler. I remember the bluethroat, nuthatch and Lapland bunting clearly and I also remember struggling to identify juvenile starlings which I was not familiar with. It was a good but expensive, holiday for a young couple not long married and before kids came along.

Fast forward to 2015 and Northern Ireland drew Norway in the World Cup qualifiers  in October 2017and suddenly there is a reason to go back and to stay in Oslo with a Norwegian friend who is married and lives in Bangor but keeps a flat in Oslo. We were really supposed to be there in spring but October would have to do. Hence we flew into Oslo for a five day/six night mini break with Ingeborg in a flat at Bergkrystallen at the end of Metro Line 4.  One thing hadn’t changed since 1975 – the prices were still horrendous. A piece of apple tart was £13.50, glass of wine £11, coffee £3.50, and beer up to £10 per pint. If you are birding in Oslo bring very deep pockets or stay with a friend.

Birding was squeezed in along with football and sight-seeing but we did manage 36 species. Much of what we saw was easy to pick up and common – cormorant, mallard, herring gull, black headed gull, magpie, hooded crow, jackdaw, fieldfare, blue tit, great tit, and house sparrow. Fieldfares were everywhere and far outnumbered blackbirds which we only saw a couple of times.

The first walk we did was round Sognsvann Lake and we spotted treecreeper, willow tit and goldcrest.

Ostensjovannet  added a good cross section of common species including feral greylag and Canada goose which I was not expecting to see. I was expecting coot, moorhen, little grebe, great-crested grebe, tufted, goldeneye, and mute swan.

A feeding siskin flock was a bonus as was the Scandanavian variety of long-tailed tit which has an all white head. No photos I am afraid but this blog by an English birder, Simon Rix, who lives in Oslo has some cracking shots taken at Ostensjovannet, possibly the same birds I saw! The blog is well worth following and I have been using it for 18 months to prepare for the trip. If you are visiting Oslo it is a must read.

http://oslobirder.blogspot.co.uk/2016/02/long-tailed-tits.html
The last morning saw us in the Botanical Gardens for an hour and a half before the rain came in and we were again surprised by the sheer numbers of fieldfares and crippling views of nutcrackers. Crossbills remained elusive, we think we heard them but could only see a nuthatch. There were also starlings, redwings, tree sparrows, blackbirds, robin and jay but the biggest surprise was a flyover jack snipe!! If I get back to Oslo I will be back there again, as it was a really good site.

Woodpigeons were scarce but we picked one up at Bergkrystallen. We also saw a great spotted woodpecker there as well as one at the ski jump. That only leaves the grey heron seen from the bus at Bygdoy to complete the set.Some birds gave close views for a phone shot.

Sorry couldn't get the number with an iPhone!!