Ailsa Craig plus plus

It’s been busy few weeks with a trip to Ailsa Craig and Portmore Lough as well as duties at WOW. Ailsa Craig turned out to be a bit iffy weather wise as it was windy and rainy – heavy squally showers. The birds were up to scratch with the 30000+ gannets, all the auks, fulmar, shag, cormorant, oystercatcher, ringed plover and four species of gull. We also saw common and grey seal and slow worms which are easily found on the island. The journey over gave good views of Manx shearwaters and 3 sandwich terns. The main problem was in getting back off as it was choppy with quite a swell and we had to wait until the boat came in to the pier, then step/jump onto the rubber hull, grab the hand rail hang on and inch back towards the stern.  We could only do two at a time and with quite a few attempts to get into position it took 45 minutes to get all 8 of us back on board. Suffice to say we were all relieved when the operation was complete and we were able to head back to Cushendall. We picked up peregrine on the coast on the way back which was a nice bonus as the nest on Ailsa was empty and we could not find any around the island.


Portmore Lough RSPB reserve hosted a barbecue for volunteers and a guided tour. The highlight was the breeding common terns – 102 nests this year. We also saw little grebe, great crested grebe, tree sparrows and over 100 mute swans as well as coot, tufted, mallard and gadwall.  The wildflower meadow was at its best and there were good numbers of butterflies, mainly green-veined white. It was nice to see another reserve and to catch up on the work there.

Visited Rowallane for a walk and picked up breeding swallows, two nests and five young. 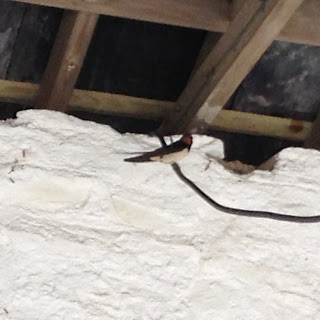 Belfast WOW is still fairly quiet as the main wader passage hasn't kicked in yet. Thursday saw common sandpiper, ruff and sanderling as well as 600+ black-tailed godwits, some still in breeding plumage having newly arrived from Iceland. The entire reseve lifted twice, once when a buzzard came in and then when a raven paid a visit. Lesser black-backed gulls also cause a stir if they do not fly high and straight over. There were still sand martins and swifts, plus over 220 black-headed gulls and 250+ common terns including a good number of chicks. Only the gulls and terns came over to be photographed, everything else stayed on the far side. I need to get a nice moorhen or coot shot, but those who come close move about too quickly for the digiscope set up. The two below had the decency to pose for a while.