After a reasonably dry and bright run of weather we have more than made up for it with some dull and wet days. Last Thursday at WOW was not the best for birding with squally, wintry showers and poor visibility. Our reference point of Rathcoole Flats appeared and disappeared regularly.

On one occasion we were nearly unable to see the Stena boat just across the Lagan. 30 species was all I saw but that did include 12 pochard, a year first and a patch first for 2017.

All the ducks are coming into their breeding finery. All we need now is a nice sunny day and a few birds on the observation rom side. The shipping highlight of the day was a Stena tanker being guided in by two tugs in a rain squall. 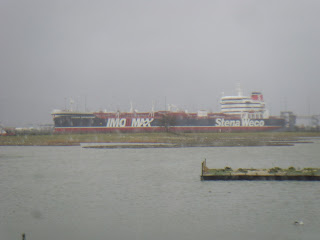 The previous day I had walked the coastal path to try and add birds to the patch list for Bangor West. I was also hoping to pick up the glaucous gull on the patch. No luck with that but I did add curlew, song thrush, mistle thrush and mediterranaean gull. The high tide roost on Seacliff Road had over 60 ringed plover and 200+ dunlin, but strangely no purple sandpipers.


This photograph from the very end of 2016 illustrates the spread of little egrets round the province. This bird was close to  a bridge on Lynne Road in the Rathmore housing area on a small un-named river which flows between back gardens. It drains from the lake in Clandeboye Estate and enters the sea at Carnalea. Not the sort of place I would have expected to see an egret. 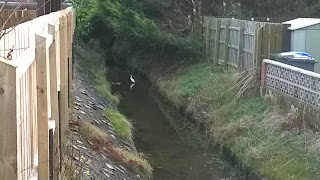 I have encouraged my son to feed birds in his garden in East Belfast and they now have a nice garden list. The plan was to digiscope goldfinches but they did not co-operate so it was left to this robin to fill the void.

I also picked up a few 2017 ticks as well as the pochard and the med gull. Mosley Mill added treecreeper as well as two dippers and a trip North added a goosander on the Maine at Randalstown and whooper swans at Toome. The green-winged teal at the Ecos Centre in Ballymena was not showing well and we dipped and froze.