I wandered lonely as a cloud

That floats on high o'er vales and hills

When all at once I saw a crowd At least that is what Wordsworth would have written if he'd lived on Airport Road as opposed to the Lake District. He may even have tried to work the bearded milkcaps into verse two as they were everywhere, a feat I am not even going to think about. 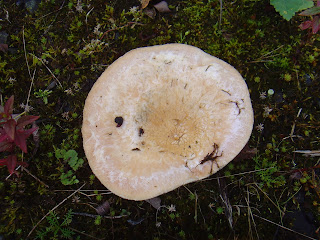 As you can tell there is not a lot to report birdwise over the last few weeks. The lists remain static despite visits to WOW and walks along the coastal path. Winter visitors are drifting in but most of them made the lists before lockdown. It was nice to see sandwich terns and brent geese on the beach at Kinnegar, one preparing to head to West Africa and the other fresh in from Greenland via Iceland. There are still a few late common  terns on the planks at WOW but realistically only Hide 2 is giving any photo opportunities and even this often has rain, condensation, poor light and photobombing reeds and grasses. My attempt with the trail-cam in daylight focused on the feeders has produced over 700 photos of the feeder moving in the wind. To quote my 4 year old grand-daughter re one of her gymnastic moves, "I'm working on it". The place to be is Myroe Levels which has a host of goodies or else one of the sea-watching points such as Ramore Head, Malin Head or Fanad Head. Carnalea and Airport Road are not yet on the must-see places for migrating birds.

Stop press:  On Tuesday  a coastal walk turned up a couple of stonechats and a female sparrowhawk rock hopping at high tide. For a split second I was thinking kestrel or peregrine, but it turned out to be a sprawk giving lovely views but not a tick!! Anyway lets have a hedgehog video to cheer us all up.