This is lockdown edition number 5 but I sneaked out of my local area and exercised at Kinnegar and Airport Road to see if I could hear a willow warbler and I heard at least three in the Kinnegar scrub. I also added bullfinch and common tern. Although WOW is still locked up it was nice to walk along the Airport Road and see how things were going. The winter ducks are gone and the black-headed gulls are nesting as the terns arrive. Birdsong filled the air, as well as willow warbler there were blackbirds, blackcaps, wrens, great tits, dunnocks and a song thrush. There were also at least three singing greenfinches, a sound I no longer hear around home. They are common on the WOW feeders so hopefully they are doing well. My spirits were uplifted and my mental health received a boost.

Locally the twice weekly walk round the local golf course came to an end this week but not before I had a singing whitethroat near the 9th tee in a patch of bramble. Swifts appeared overhead in the garden and swallows over the Marina. The garden is noticeably quieter and there are fewer birds around. My garden lockdown list is firmly stuck on 29. Dunnock remains the commonest bird with jackdaw, magpie, woodpigeon, starling and coal tit. The jackdaws have a nest in a blocked chimney and are frequent visitors. Gulls and crows pass overhead but finches are scarce and house sparrows occasional. Few bird photos I am afraid, mainly nice views of the coast and a few of the usual suspects in the garden. The garden bird photos were taken at breakfast as we sat in the garden. By sitting quietly the birds were quite unconcerned as long as we didn't move too much. In Ulster-Scots terms my favourite is the hedgeling or shufflewing which is so descriptive of the bird. 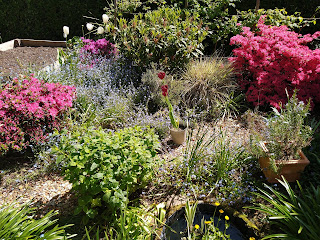 Finish off with a nice one of our back garden which I have sent off to be made into a jigsaw. This is how we pass the time in lockdown. To date we are on number 14, mainly 1000 pieces with a few 500 pieces thrown in for light relief. We are getting quite good at them and have a jigsaw station in the dining area with three tables to put all the pieces out. We also do the odd wasgij for fun. Google it and see what you think!! Hopefully we will have a few more trips out and a few less jigsaws and wasgijs.