Not been a lot to say recently as ticks are harder to find and the spring rush has tailed off into summer. Now is the time to get the optics serviced ready for the autumn reverse migration. We are off to England soon, so hopefully something will turn up en route in Scotland, Tyneside, Bawtry or Bolton. Meanwhile a quick summary of late May, June and very early July.

The North Down patch is stuck at 66, hopefully I can still make 70 but I have got most of the expected species. The pool at the top of the Glen produced a little surprise in the form of breeding mallard. 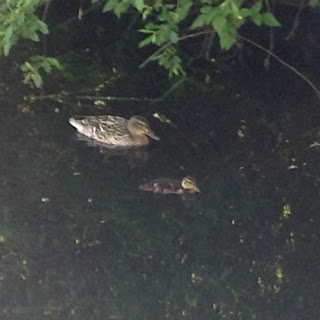 Belfast WOW added blackcap and wood sandpiper. The black-headed gull chicks are everywhere and we have 10 or 11 Mediterranean gull chicks as well as the first common tern chicks. There are broods of mallard, moorhen, coot, shelduck, goldfinches and greenfinches. The mute swans did not breed and have flown off.


Some brightly coloured godwits have popped up recently and it is possible that they are failed breeders who have returned early. As you can see last Thursday was a bit wet and the NE wind was hammering the rain into the windows making observation a problem. This combined with less than average light and a low tide meant waders were at a premium. Nevertheless we still managed over 30 species including sand martins. We think these are from the colony at Kilroot and we are keeping our fingers crossed that they might look at our sand martin bank!! Passing motorists had to take avoiding action as the swallows and house martins were hunting up and down the road at ground level. Every visitor commented on the numbers and height at which they were hunting.

Rathlin Island on Saturday gave up 35 species in dull wet weather. We went to the West Light and the RSPB reseve and then walked to the harbour. Some notable omissions on the list might necessitate a visit in August but I was able to add puffin, great skua and kittiwake. Mistle thrush was a bonus otherwise the list was as expected. We were treated to a tractor rally - 14 of them had driven up to the reserve. Three were local the rest came over on the ferry as day trippers!!


In the 1980s I ran trips to Rathlin to see the birds and we used an open boat called the St Martin. I needed 20+ people to fill the boat an off we went with Peter McCurdy sitting at the tiller in the stern. The crossing itself was an adventure never mind the birds and at that time we marvelled at seeing buzzard and chough. Then along came the MV Canna and the open boat was a thing of the past. Now the Canna has been replaced as well by the Spirit of Rathlin which segregates cars and people. I came across the St Martin on the beach in Church Bay and as you can see the years have not been kind to her and I felt a twinge of regret for the old days when crossing to Rathlin was not for the faint-hearted. Then I remembered being seriously seasick a couple of times on the St Martin and recalled Ecclesiastes 7:10 " Do not say ' Why were the old days better than these?' For it is not wise to ask such questions."