You read it here first. While painting the gate to the rear garden this morning I heard a familiar "Kronk, kronk" overhead and there was a raven flying over the garden towards central Bangor. I have been anticipating this for some time but it is still nice to see and hear it. Next year Castle Park is off the patch and Ballyholme is on.

I spent a pleasant 90 minutes sitting at Stricklands Bay behind the scope on Sunday afternoon. The thinking was that the terns sit on the point to the west and I might get some shots. The best ones are these two of common terns - a patch tick no less. 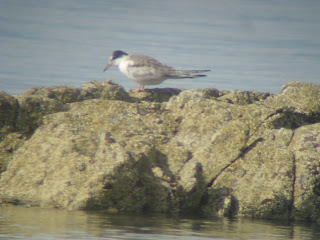 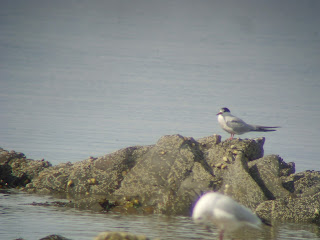 Belfast WOW has better water levels and August 20th was a good morning all round producing 38 ruff, little stint, wood sandpiper, common sandpiper, greenshank, sanderling, spotted redshank and an immature peregrine hunting unsucessfully. Most of the terns have fledged and numbers are down to a couple of hundred, but we had 35 species all told as we had 6 people working scopes at the same time, hence the extensive list. If something appeared somebody was on to it. There was also a 60+ finch flock at the back of the reserve, mainly goldfinch and linnet and a passing buzzard. In previous years I have gone there to see a ruff and been over the moon to see two, nearly 40 was incredible. Later in the week there were more than 50. The waders are on the move and autumn is on the way.

The following day we had a quick visit to the Quoile and managed to see over 100 mute swans and a kingfisher, first there for a long time. Most stuff was on the far side and I did not have a scope as I was not expecting to be there.