Having missed out on the Rathlin trip due to bad weather I was fortunate enough to be able to go on a trip to Ailsa Craig on Tuesday. This left Cushendall around 1000 and reached Ailsa Craig about two hours later. The sight, sound and smell is fantastic - one of nature's wonders.

We had an hour on shore,  just time enough to lunch and explore a small area round the landing stage. 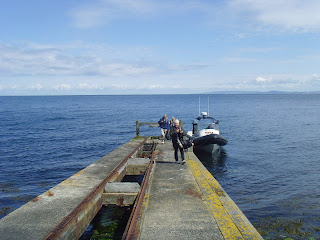 There is a small rail network which was used to bring granite from the quarry to the pier so as it could be shipped to the mainland. Ailsa granite is used to make curling stones as it is the best type of granite to use. Apparently all the curling stones in the world are made from Ailsa granite. They were allowed to quarry 2,000 tons in 2013 sufficient to fill anticipated orders until at least 2020. 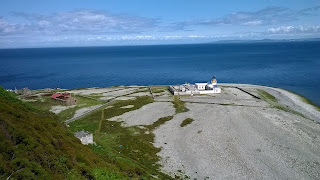 We only had time to climb up to the Castle - but even from here the views are superb as you can see the small area of flat land where the quarrying operation was centred. The lighthouse is now automatic so nobody lives on the island anymore. 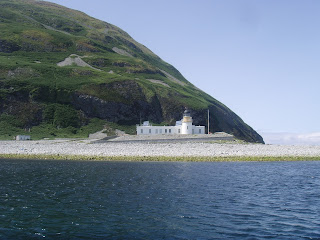 We then drifted round the island and set off for Cushendall.

The homeward journey was choppier and took longer than the outward journey and we arrived at Cushendall around 1800. We only saw 20 species but what we lacked in numbers we made up for in quality and quantity of birds - gannet, fulmar, manx shearwater, guillemot, razorbill, puffin, black guillemot and kittiwake were all seen in large numbers. We also picked up ripit, mipit and Raven - the only passerines on the island apart from wren. All in all a mega birding day which will live long in the memory. The icing on the cake was a red-throated diver just off Cushendall on the way back. What it was doing there in July we had no idea, but it was an extra tick on a bird filled day.