Up and out before dawn for a socially distanced two car birdathon round the northern and western side of Strangford Lough. We went anti-clockwise and kept to minor roads as much as possible but we still hit 68 species. I am not going to list them all, just mention the highlights which were many. We started at the Flood Gates in the NE corner wher we had up to 2000 golden plover in the air, a nice flock of knot and pintail. All photographs of our jaunttaken by David Miller.

Islandhill next for tree sparrow and then round to Castle Espie for kingfisher.

Whiterock gave us shag, black guillemot and little grebe as well as snipe and buzzard.

Then to Killyleagh which we nearly left out and were glad we didnt as we ticked grey wagtail, red-breasted merganser, guillemot and three overwintering sandwich terns!! 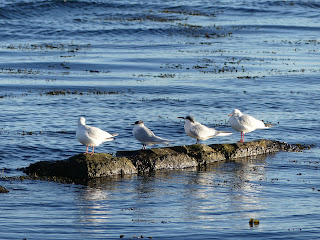 Finally to the Quoile for the overwintering bufflehead, redwings, shoveler, gadwall, goldeneye and sparrowhawk. By that time the light had gone, and we finished there and headed home.

The local patch is ticking over nicely and  the garden added bullfinch, goldcrest and blackcap to the 2021 list as well as all the usual suspects including five linnet. I even managed a buzzard along the coast being mobbed by hoodies. WOW is closed apart from Hide 2 and we are not supposed to leave home except for essential journeys. This rule came in on Friday so on Thursday we drove to Belfast Waterworks for our exercise and happened to see an iceland gull - quelle surprise! All photos from here on in are mine.

On the way home we swung round WOW and Kinnegar and added eider, great crested grebe and ringed plover to the list and ticked off 20 other species for the WOW patch. I think there won't be a lot added to WOW until mid-February but the local patch will get a battering over the next four weeks and the garden is always liable to turn up something unexpected. Stay safe and bring your binoculars on your daily exercise even if you are only going to the shops.